This Moche culture is best known for their intricately decorated ceramics, goldwork, and monumental constructions known as huacas.

The Moche civilization spoke two distinct languages. North of the Lambayeque Valley, the people spoke the Muchik or Mochica language. Through the rest of their territory to the south, they spoke the Quingan language. Some linguists believe both belonged to the Chimuan language family. However, as they are now extinct, it may not be possible to confirm this relationship.

While the Moche people did not have a written language, archaeologist and founder of the Larco Museum Rafael Larco Hoyle proposed that they had a type of proto-writing. Lines, dots, zigzags and other symbols painted on lima beans led to this conclusion. Contrarily, other researchers believe these designs relate to agricultural cycles, games or a number of other purposes.

Regardless, their capacity to tell a story through visuals and symbols in their art is impressive. Much of what we know of the Moche civilization today comes from the long-lasting designs on their ceramics that tell the stories of their people. 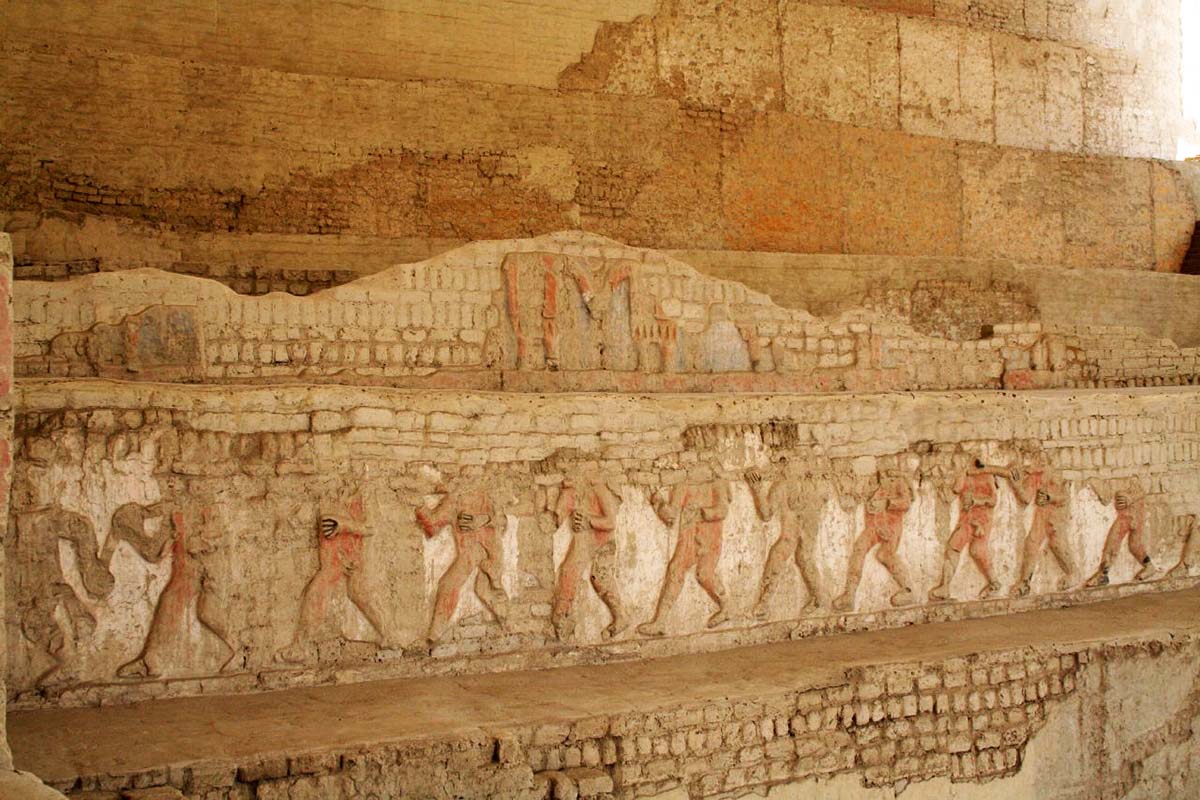 Moche religion was heavily influenced by the preceding Chavin culture. Like most Andean cultures, there was a deep connection with the cycle of life and death.

While certain aspects related to their beliefs have been lost to time, we do know of several gods important to the Moche people.

While the Moche society likely included different ethnicities, had several different rulers, and even spoke two distinct languages, their religious beliefs were one common thread connecting the people in this society. 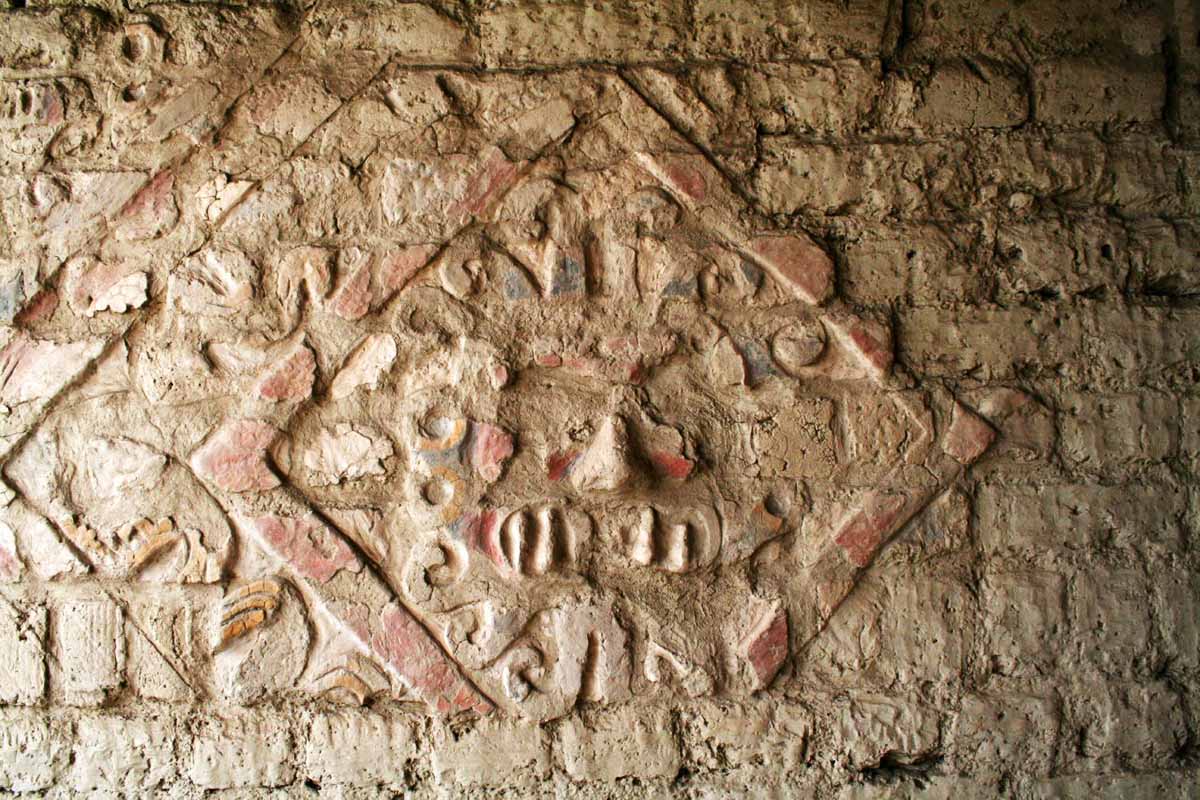 Moche pottery was used for everything from eating and drinking to human sacrifices made to the gods. The most intricate pieces were used for ceremonial purposes and often buried with elite rulers. Today, Moche ceramics are some of the most pristine ancient artifacts in the world. 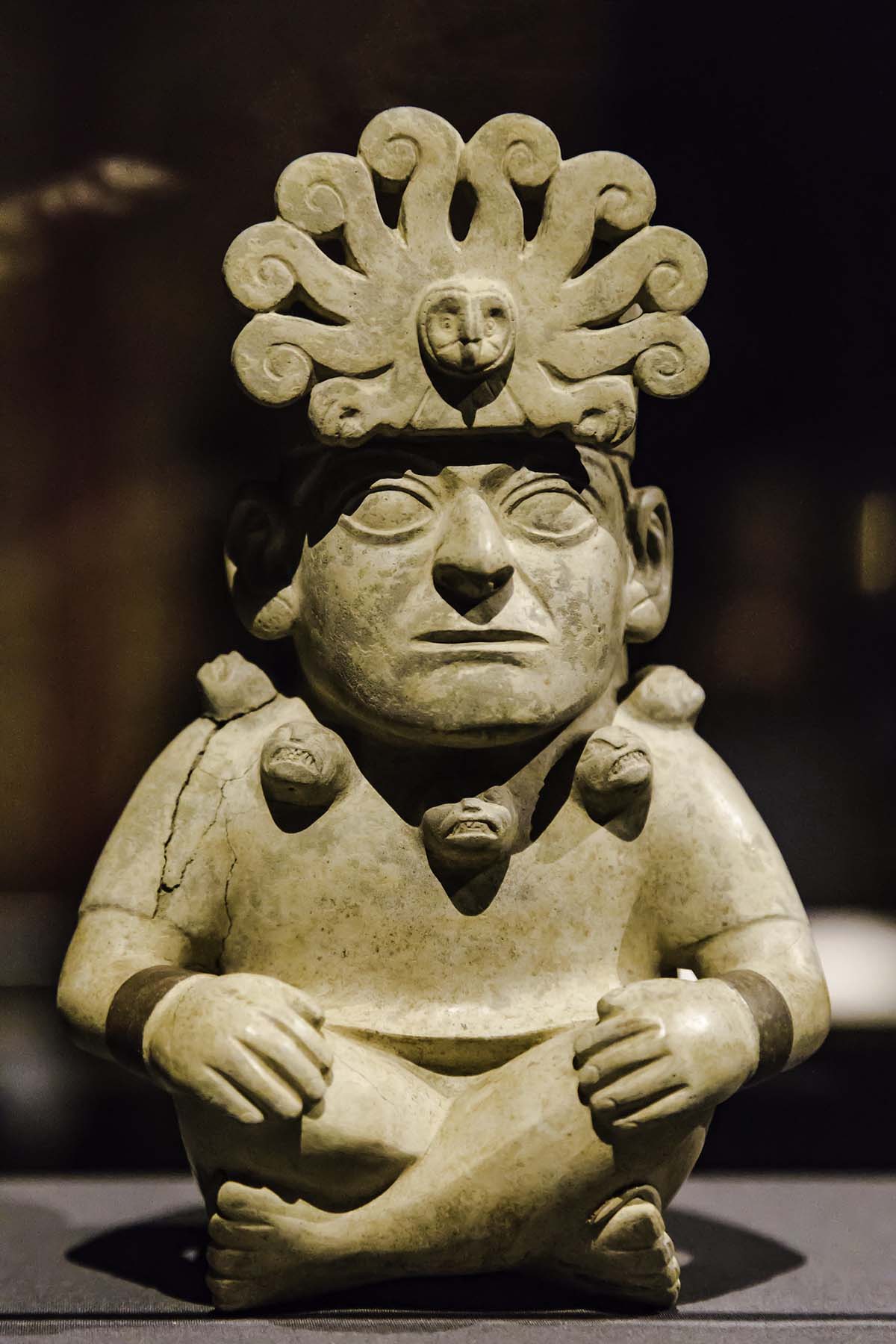 The Moche were impressive metalworkers, primarily using gold, silver, copper and their alloys. In addition to jewelry, they made tools, weapons, headdresses, ceremonial attire and important ornamental pieces for their rituals.

Moche clothing and textiles are not as well preserved as those from the cultures of Peru’s southern coast, such as the Paracas. Most of the excavated textiles were used for funerary purposes, with little remaining of daily attire.

Their architecture primarily consists of adobe blocks, often built into pyramid-shaped temples. Within their temples, the Moche painted large murals with various natural pigments extracted from minerals. The murals tend to focus on their religious figures, but some use subjects from daily life, such as animals and human sacrifices on this mural at the Temple of the Moon. 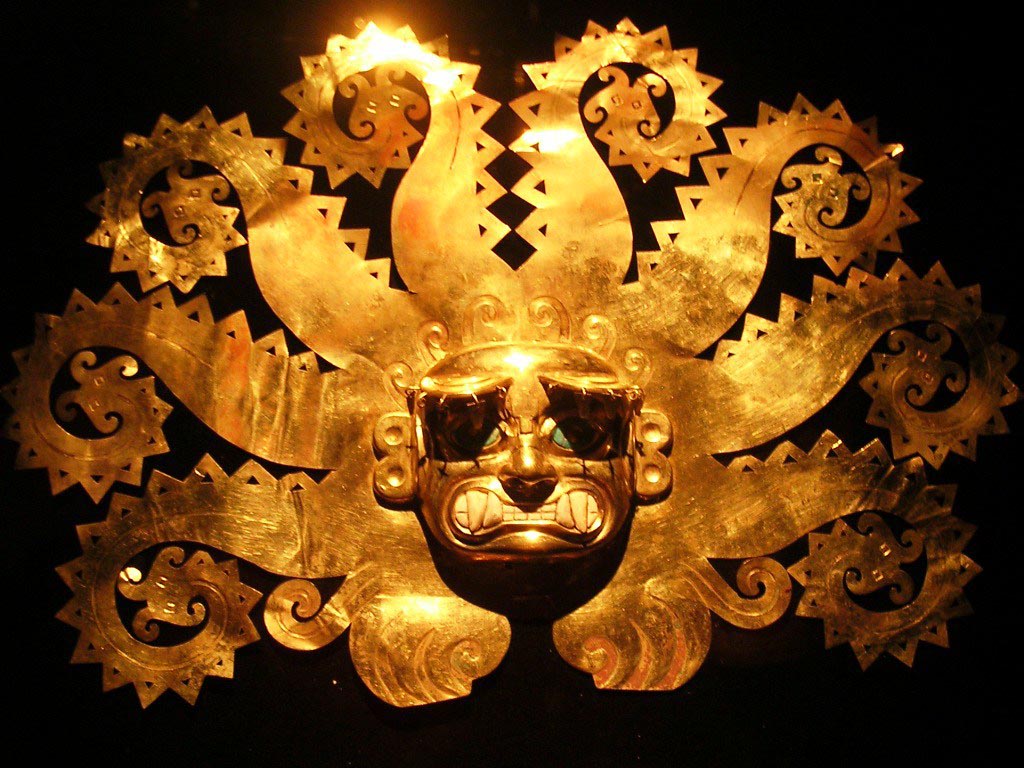 A gold headdress and mask from the Moche civilization. Image: Moche, maschera d’oro by pmproni, used under CC BY-SA 2.0 / Compressed from original

The Moche irrigation system was extremely efficient. As the economy relied heavily on agriculture and internal trading relationships, the irrigation system ensured their entire region had water for their crops. As a result, this prevented internal conflict over resources. Across the different Moche regions, the main objective was to incorporate new territories. They did so by expanding their irrigation systems to draw people in.

Besides agriculture, the Moche economy was driven by fishing and expeditions to collect guano to use as fertilizer. Close to the Pacific coast, the Moche were among the first to use totora reed boats. Fishers in Huanchaco and other cities still use this type of watercraft to this day.

Feathers from Amazonian birds found in Moche burial sites led researchers to believe they traded beyond the Andes with tribes from the jungle. Trading extended north into Ecuador for scallops, a sacred good to the Moche, and south into Chile for precious stones such as lapis lazuli. 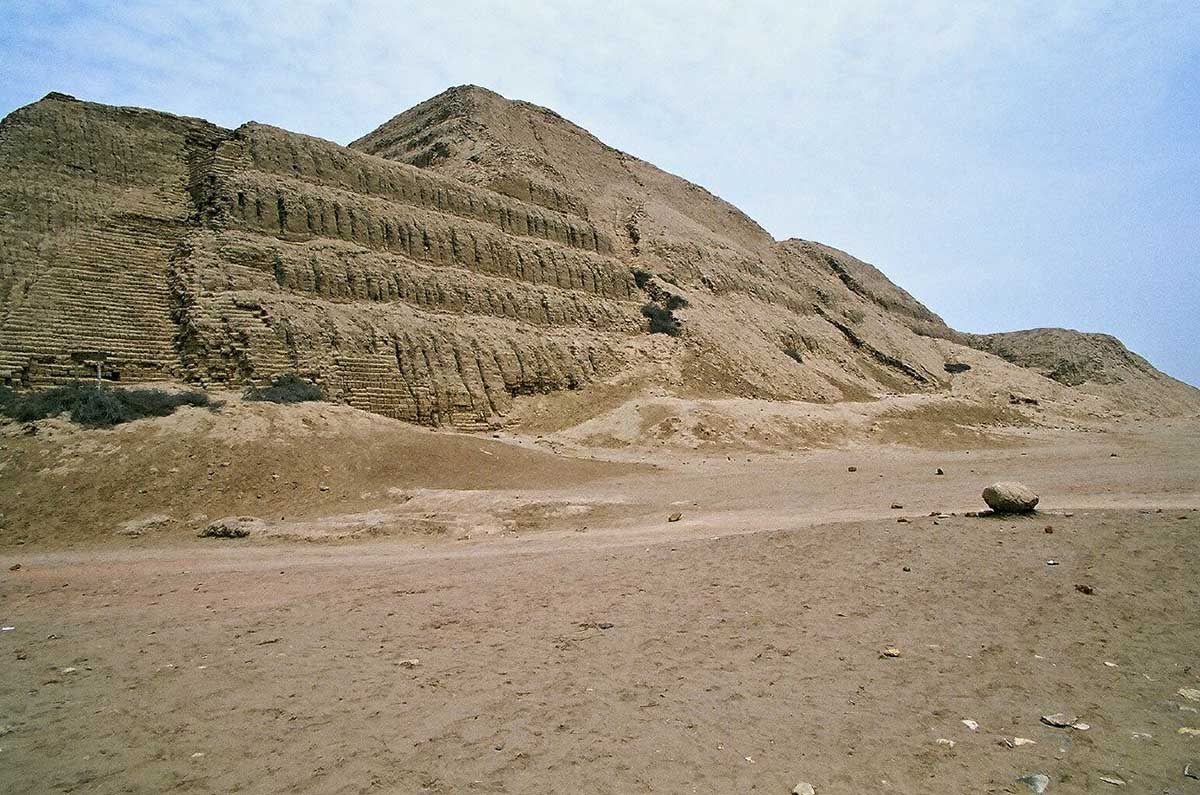 The exterior of the Huaca del Sol. Image: Temple of the Sun by Omar Navarro, used under Public Domain Mark 1.0

Although this is a topic of much debate, most scholars believe that the Moche were not a monolithic state or empire. Instead, researchers believe that they were a group that shared a common elite culture, depicted in the iconography and architecture that still survives today. Excavated graves of prominent rulers at various sites have led to the belief that several rulers existed at once, each in control of a smaller region.

The Moche society had two distinct regions, separated by language and rulers. The north spoke the Mochica language, while the south spoke Quingan. The regions developed independently, but with constant interaction.

But who ruled in the Moche government? Recent archeological evidence indicates that women played a key role in Moche politics. 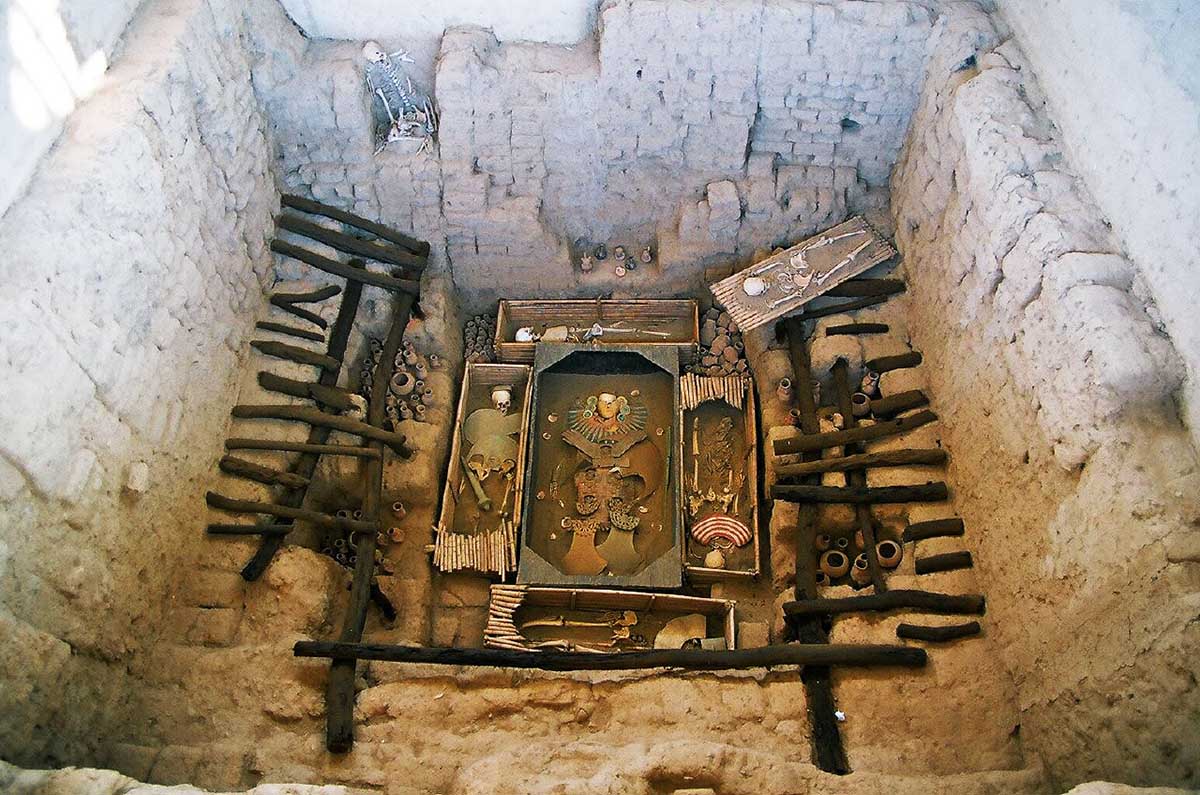 The burial chamber of the Lord of Sipán. Image: Tomb of El Señor de Sipan by Bruno Girin, used under CC BY-SA 2.0 / Compressed from original

Recent excavations and discoveries have shown that women held an elite role in ruling the Moche civilization. The idea that men exclusively ruled the culture has been discounted after several prominent female skeletons were exhumed from opulent burial chambers. Women were likely rulers of some communities in the area, while men had control over others.

Since excavations first began in 1991 in San Jose de Moro in northwestern Peru, eight elite female burial grounds have been unearthed. However, the most impressive discovery came in 2013.

Archaeologists uncovered the remains of a high priestess-queen in an impressive burial chamber. The queen was buried alongside two female attendants and five children, all presumably sacrificed. Researchers have since found several key hints regarding the woman’s identity and role in society.

Most importantly, the Moche believed that societal roles continued after death. Therefore, their tombs had the materials necessary to continue performing their role in the afterlife. Next to the skeleton lay a tall silver goblet. This goblet appears in Moche art depicting human sacrifice and the drinking of blood. Researchers have exclusively found these types of vessels in the tombs of powerful rulers.

Another clue regarding the importance of this woman is the extensive decorations on the coffin. While the wooden box itself had long decayed by the time it was found, it had been covered in copper plaques. Close to the skeleton’s head, they found a copper funerary mask (that most likely once laid on top of the coffin).

Researchers believe this priestess-queen and the others found at this site were crucial in governing the spiritual and political affairs of the region. As excavation director Luis Jaime Castillo Butters tells National Geographic, “Twenty-five years ago we thought that power was monopolized by male warrior-priests.” 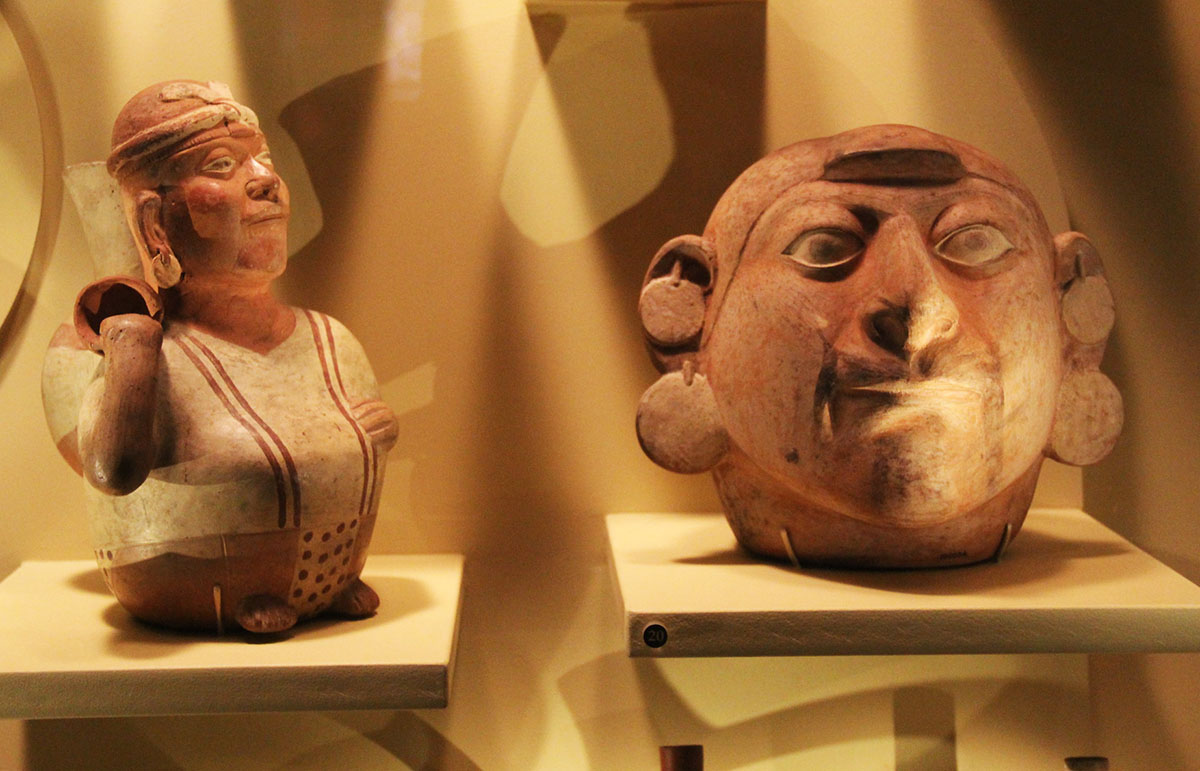 At the El Brujo archaeological site near Trujillo, researchers uncovered a tattooed female mummy in 2005. This mummy earned the name Señora de Cao, or Lady of Cao, after the nearby town Magdalena de Cao. Some scholars believe this woman was a warrior queen.

She was buried with huge ceremonial war clubs and nose rings with implicit designs, including men holding war clubs — a traditional symbol of power. Tokens of great wealth were also found with the mummy, including 15 different types of necklaces.

On display at the El Brujo Museum, archaeologists and scientists continue to make new discoveries. Technology and forensics allowed them to make a permanent record of her remains and, more recently, to reconstruct her face.

As a result of this find and those at San Jose de Moro, researchers have determined that power in this area was held by women. 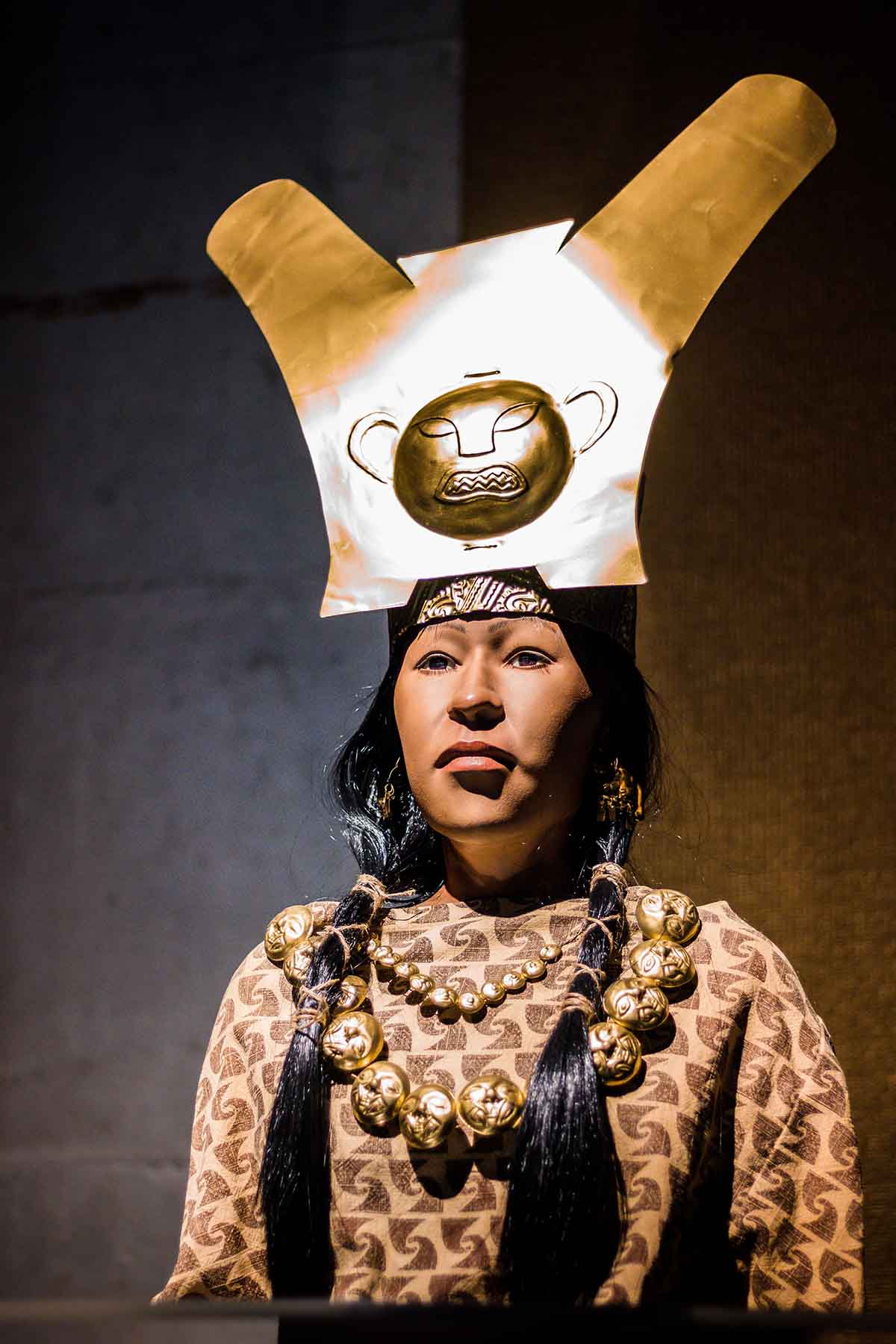 The Señora de Cao, or Lady of Cao, reconstruction at the El Brujo Museum. Image: Museo Cao by Ozesama, used under CC BY-SA 4.0 / Compressed from original

While studies and excavations continue at several archaeological sites, the following are top Moche sites to see in Peru.

Huaca Rajada, also known as Sipán, is an unfinished pyramid that is now the site of the Royal Tombs Museum. The Lord of Sipán, or Señor de Sipán in Spanish, was once a powerful ruler. His grand burial chamber was the first of several massive Moche tombs excavated at this site. The museum offers the opportunity to see many of the artifacts found at the site on display. They also exhibit an exact replica of the Lord of Sipán’s tomb.

The Huaca del Sol, or Temple of the Sun, and Huaca de la Luna, or Temple of the Moon, sit 0.3 miles or half a kilometer from each other. They were once a part of the capital city of the Moche society. It took millions of adobe blocks and hundreds of years of construction to build these two huacas. Some of the best-preserved artifacts of the Moche civilization came from this area and are on display for visitors.

To visit the Señora de Cao mummy, head to the site known as El Brujo and its accompanying museum. The largest constructions at El Brujo are from the Moche people, but others only date to the Chimu and Sican groups. Excavations at the Huaca Prieta have found the first known use of cotton and indigo dye, dating back 6,000 years. Additionally, they uncovered the earliest evidence of avocado’s existence in the world, dating back 15,000 years ago. 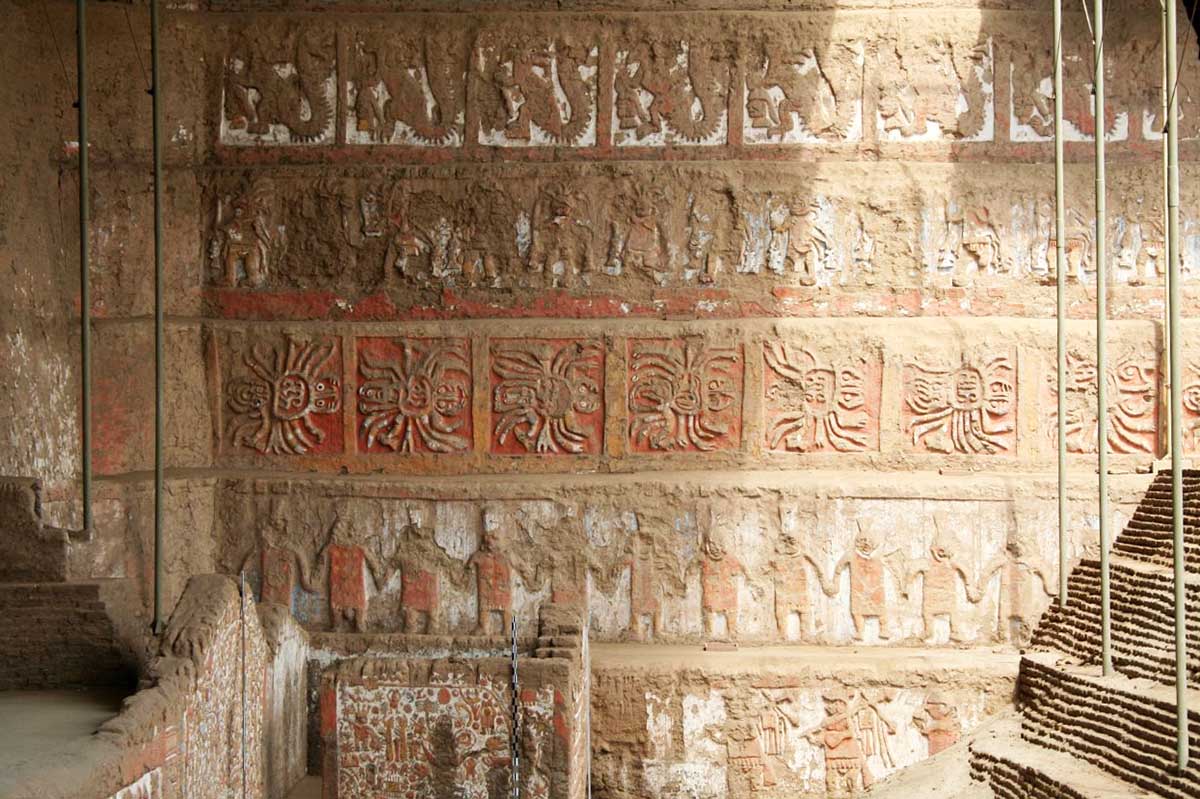 Several of the Moche architectural feats have stood for over a thousand years. There is truly no better example of this than the long-lasting huacas in the northwest of Peru. In visiting the cities of Chiclayo and Trujillo, you can explore the homeland of the Moche, as well as several other incredible ancient Peruvian civilizations, like the Chimu and Sican. 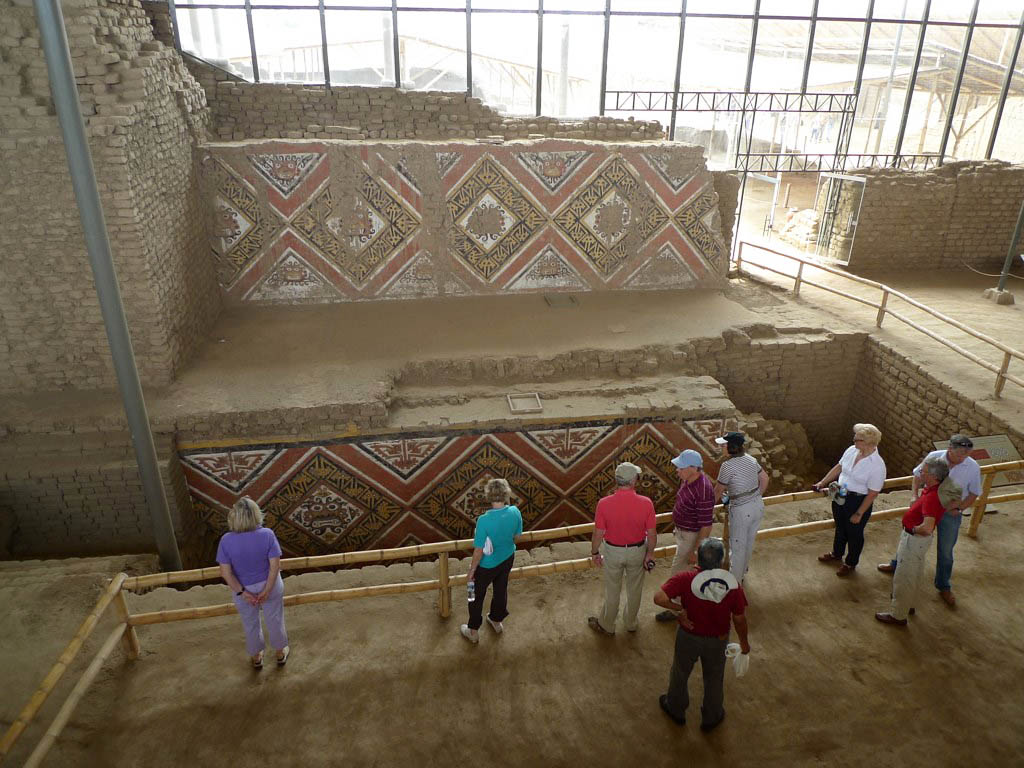 Visitors get a closer look at the Huaca de la Luna temple in Peru. Image: Las Huacas de la Luna – 13 by Warren Talbot, used under CC BY 2.0 / Compressed from original

Moche artifacts are on display in museums around the world today. However, there is nothing quite like seeing the Moche achievements for yourself in their homeland. Visit the remnants of Moche civilization near Trujillo.