The Great Inca Trail or “Qhapaq Ñan” in the Quechua language, was the main axis of a great road system that had approximately 30 thousand kilometers of roads. An extensive communication network that had been organized throughout the many centuries of Andean civilization (pre-Inca) and that the Incas had articulated, as part of an integrating and expansionist political project of continental magnitude called Tawantinsuyu, which reached its maximum expression in the fifteenth century.

The road system is structured on the basis of longitudinal and transversal roads, strategically arranged with the Andes Mountain Range as the backbone; People passed through its lines and knowledge, ideas and customs traveled with them, as well as products linking and integrating various ecological floors characteristic of the Andean region.

This road network linked the entire Tahuantinsuyo through the current territories of Argentina, Bolivia, Chile, Colombia, Ecuador and Peru, crossing deserts, agricultural areas, mountain ranges, swamps, etc. All routes departed from Cusco, the Imperial city. The most important of them is the one that went in the direction of Quito, the current capital of Ecuador.

The Qhapaq Ñan mainly meant the base of the Inca political expansion, since it allowed the rapid mobilization of the armies and of the state officials. In addition, it facilitated the transport of valuable resources, such as metals, spondylus shells, wood, coca leaves, textiles, etc.

The tambos, enclosures that were used as shelters and warehouses, were arranged along the roads to allow travelers to rest and store their belongings. They were usually rectangular in shape and divided into several independent spaces. There were tambos of different sizes: the largest had residential areas, squares and warehouses, and were used to house the Inca and his entourage. The smaller ones served as inns for the chasquis, who were messengers from Tahuantinsuyo.

The construction of bridges was also decisive for the Qhapaq Ñan, because thanks to these, the Incas were able to cross slopes, rivers and, in general, a rugged Andean geography. Some of these platforms were built with stones and others with wood. There were also suspension bridges that were built with vegetable fibers, as is the case of the Q’eswachaka, considered the last Inca bridge that remains in force until today.

The Incas were not the only ones who built roads to link their territories. Many of the routes that they used and integrated into their road system were built by the cultures that preceded them. These paths were exclusively local and linked sacred centers or huacas with small towns.

Some archaeological complexes of the Wari culture, such as Piquillacta, for example, had important road systems. Other evidence of pre-Inca roads is found in the Moche Valley, on the north coast of Peru, and in Lima, where roads were built on both banks of the Chillón River, in Pachacámac, and in the Cañete River Valley. These roads were crossed by others that reached the Andean areas, and even the Amazon. In 2014 it was named a UNESCO World Heritage Site. 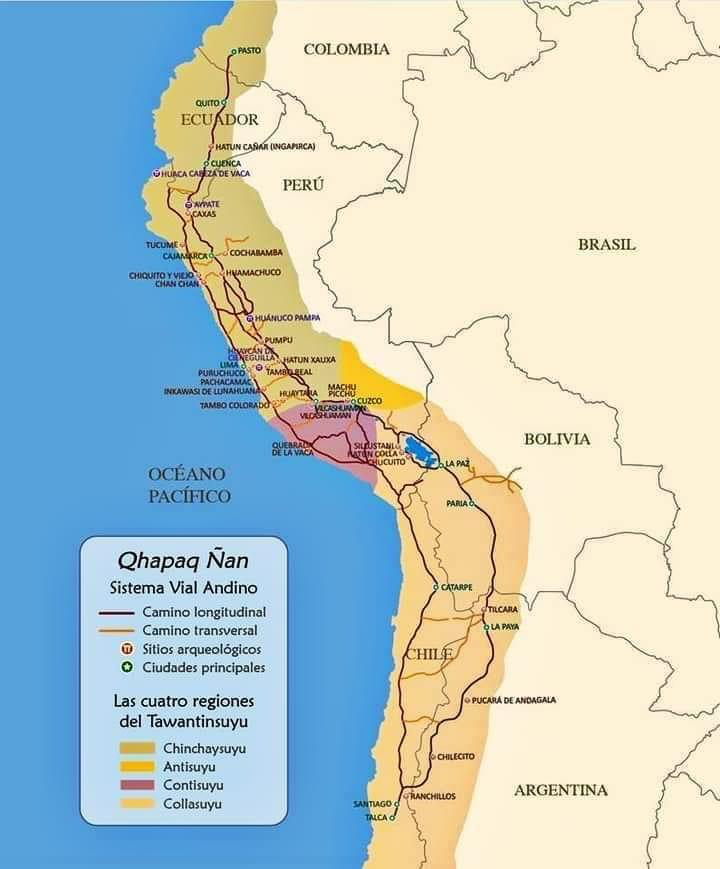 by Your Guide in Perú